arrival to Beirut airport, meet the assistant, Transfer to the hotel.
Beirut Historical tour (Optional) or chose an activity

South
Departure from hotel in Beirut at 8:30 am towards Sidon- Tyre. Breakfast stop for “Kaake” at Abu Arab (Syrian origin breakfast). Visit the big mosque in Sidon and continue towards Cana. Proceed to visit Cana in Tyre, where Jesus Christ performed his first miracle being water turned into wine. After this visit, you will be guided to have your lunch in a local restaurant .At the end, visit Maghdouche where Virgin Mary waited for Jesus Christ to return from his preaching mission.
Return back to hotel

Kesserwen
Departure from hotel in Beirut at 8:30 am towards Kesserwan to start your visit at Christ the King “Yassu3 El Malak”, a colossal statue of Jesus Christ, arms wide-open on the top of the mountain peak, the continue to visit the Lady of Harissa by cable, and the Greek Orthodox Patriarch. Lunch will be served in one of the local restaurants overlooking the bay of Jounieh. Continue then to visit the convent of one of the famous Lebanese Saint who devoted his life to God in Annaya; “Saint Charbel Makhlouf” whose life story and miracles have dawned the world at large. Continue to wards Hardine to visit two saints’ tombs and monasteries “St. Rafqa” and St. Hardine. Return to Beirut at 19:00

North.
Departure from hotel in Beirut at 8:00 am towards the North. Breakfast pit stop in a local bakery and proceed to visit of Saydit el Nourieh overlooking the bay of Chekka, a Greek Orthodox monastery was built in the 17th century. The miraculous icon of the Theotokos has been venerated for centuries for having glowed with light to attract wayward ships. Proceed then to Wadi Qannoubine: from the late 7th century, Maronites fled to the valley from their original areas of settlement in the Levanter area. The Maronite monks established their new center at Qannoubin, in the heart of the Qadisha, and monasteries quickly spread over the surrounding hills. You will be visiting one monastery into the deep-cut valley of Kadisha, surrounded by mountains towering over the gorge, leaving only a patch of the sky visible overhead, The Mar Lichaa monastery.
You will have your lunch in one of the few restaurants located in the valley for typical Lebanese homemade food.
You will then proceed to visit Mar Antonios Qozhaya The Monastery of Saint Anthony the Great, the living Treasure of North Lebanon. Historians and scholars suppose that this Monastery was first built and began to be occupied by hermits at the beginning of the fourth century.
Your final stop will be at Bkerké, north of Beirut (the Maronite Patriarch resides in the northern town of Dimane during the summer months)

Douma, Batroun
Departure from Beirut towards Douma, Batroun Caza, to visit Saint John the Baptist Monastery, a Greek orthodox monastery in Douma, dating back to the 5th century. You will have a breakfast pit stop on the way of “saj”, Lebanese breakfast in the village.
Your lunch will be in Douma in one of the restaurants overlooking a breathtaking waterfall.
You will then proceed to a High up on a sheer cliff face, accessible via a trail and steps, the Greek Orthodox monastery of Hamatoura, established it is believed as early as the 4th century, being at its height in the 14th century where some 200 monks were in residence. It was a good walk, zigzagging up the cliff on a warm day, but well worth it.
Your final stop will be to the Balamand Monastery in Tripoli is a very prominent Orthodox monastery that has a seminary and a University associated with its monastery.Return to Beirut.


Get some light snacks that will boost up your energy such as dried fruits. Pack your backpacks with water, a cap, sunglasses and sunscreen. Don’t forget to get a jacket & your CAMERA

Jeita Nominated for the seven world wonders. Jeita is one of the world’s most... 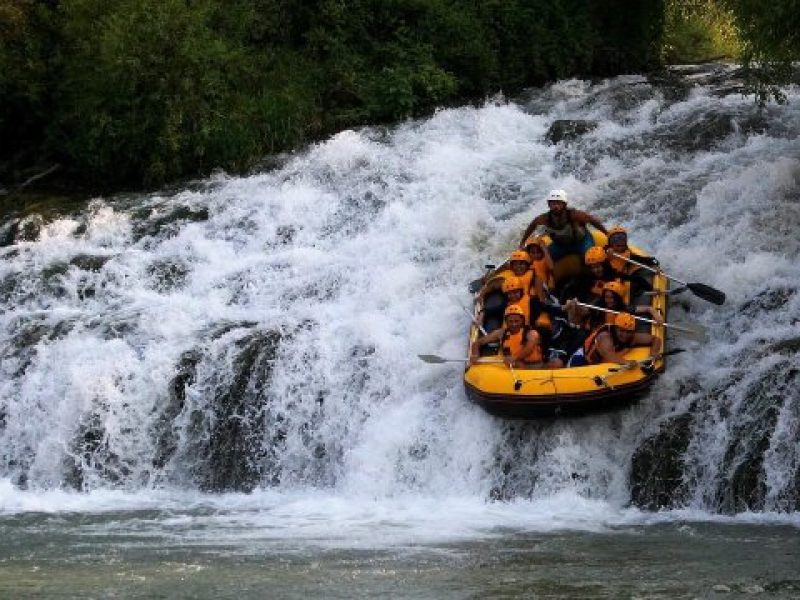 Lebanon’s Jezzine is one of the country’s most beautiful districts. Surrounded by mountain peaks...